We woke up at Sen Monorom and spent the day travelling to Banlng. We left the hotel and hit the road. It had become a tradition for me now that every time we rode out of a hotel or set off for the day I would give Scouse a rendition of Canned Heat's on the road again over the scala, I think he secretly liked it and by this time we was beginning to join in.

We road for about 15km and filled up the bikes before setting off road. After having the fall the previous day my confidence was a bit shot and it took me a while to get into things. We road some quite challenging single track roads and already I was dripping with sweat.

I had managed to get back into the old habit of holding of for dear life and becoming tense on the bike, this isn't good. It drains you of energy so quickly and doesn't really make riding enjoyable.

We stopped after a while, parked up the bikes and filled up our camel packs with water and some myself included taking Royal D (electrolyte drink) to try and get some energy back. 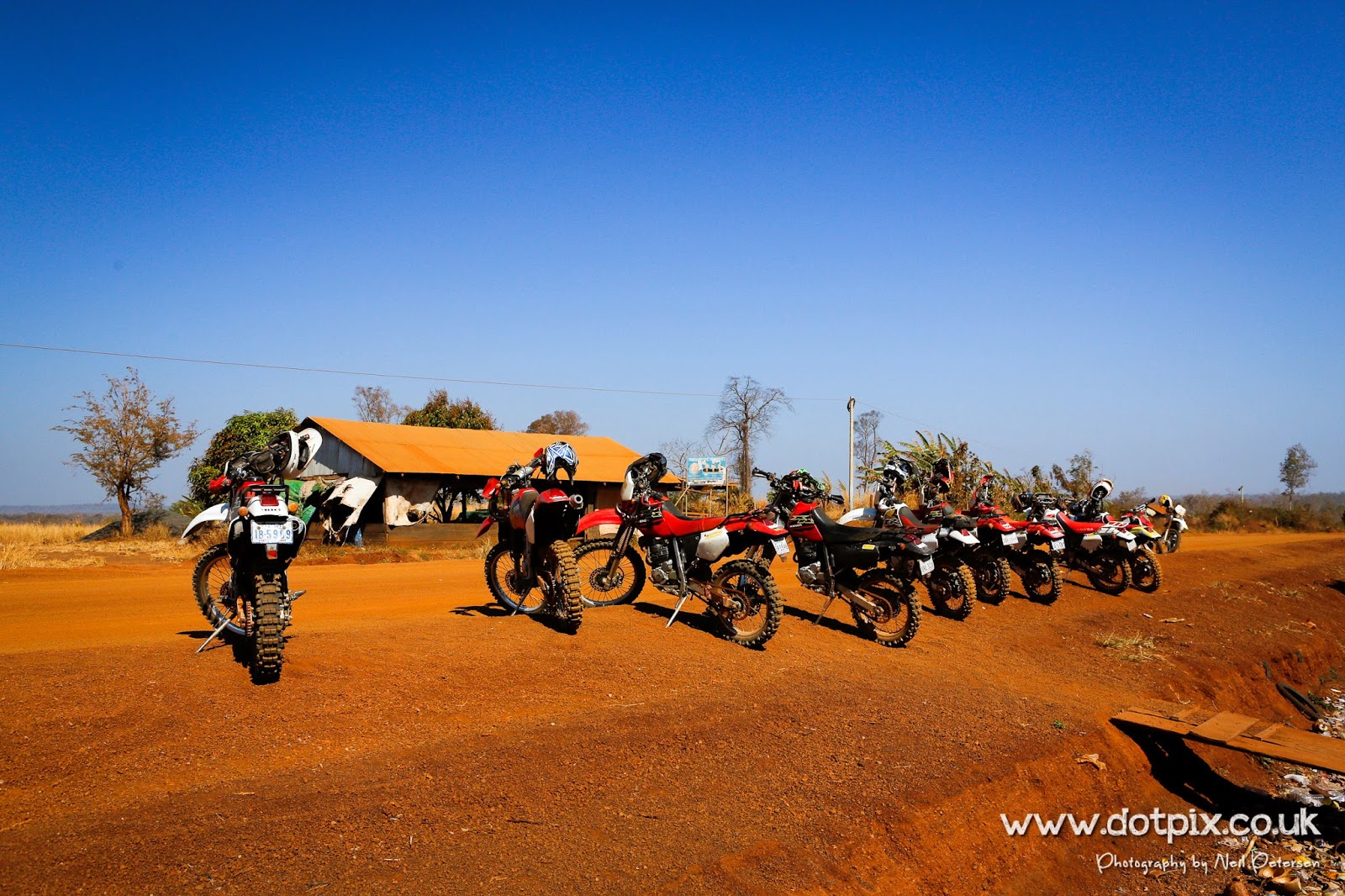 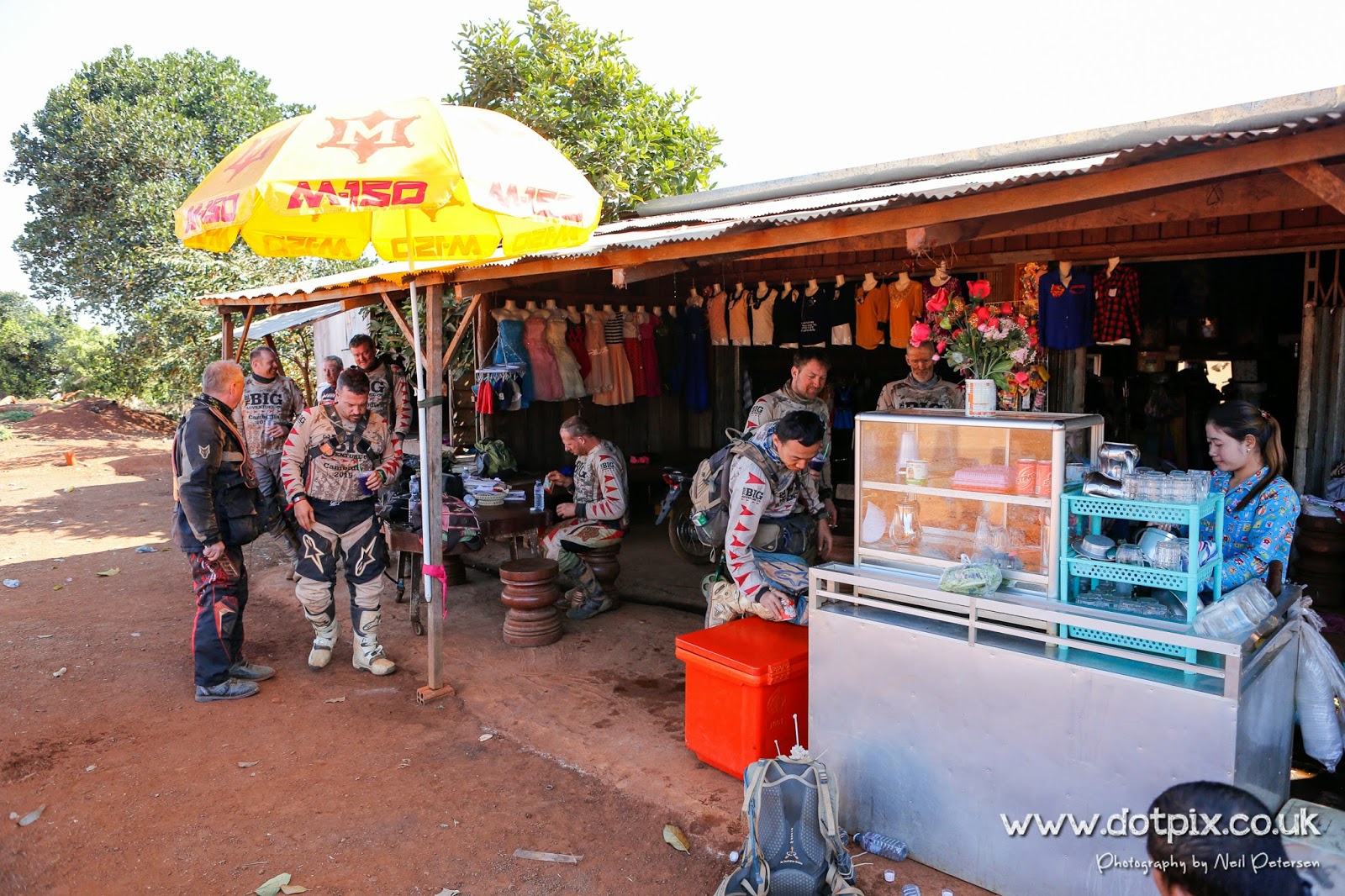 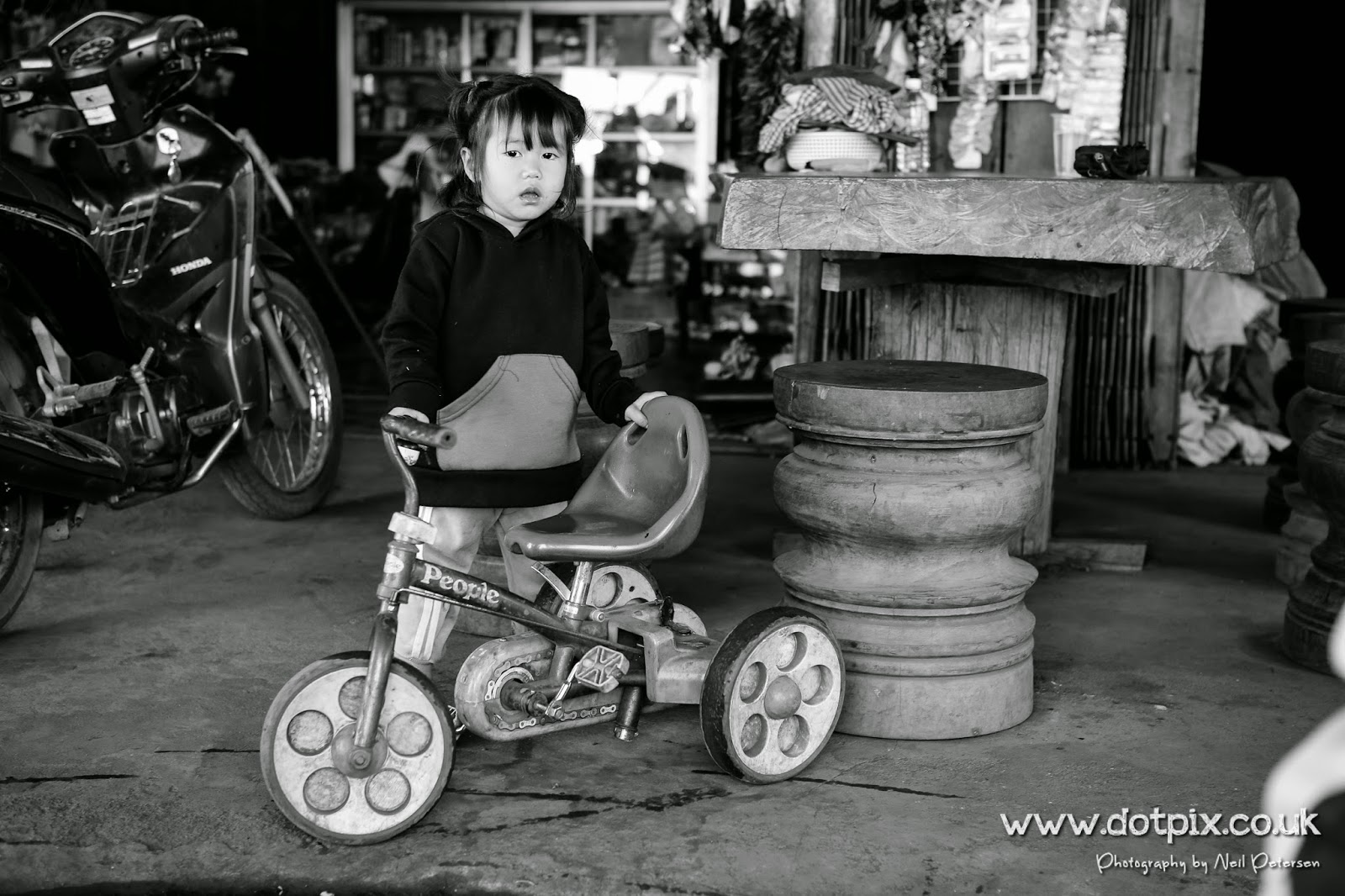 Some locals had as much interest in taking pictures of us as we did them. This one man had just returned from a trip to New Zealand. This is quite a thing as a lot of Cambodians have never travelled. The lady below is crushing ice for use with Iced coffees which was another staple in our diet on this trip. The coffee is strong and is optionally served with condensed sweetened milk. 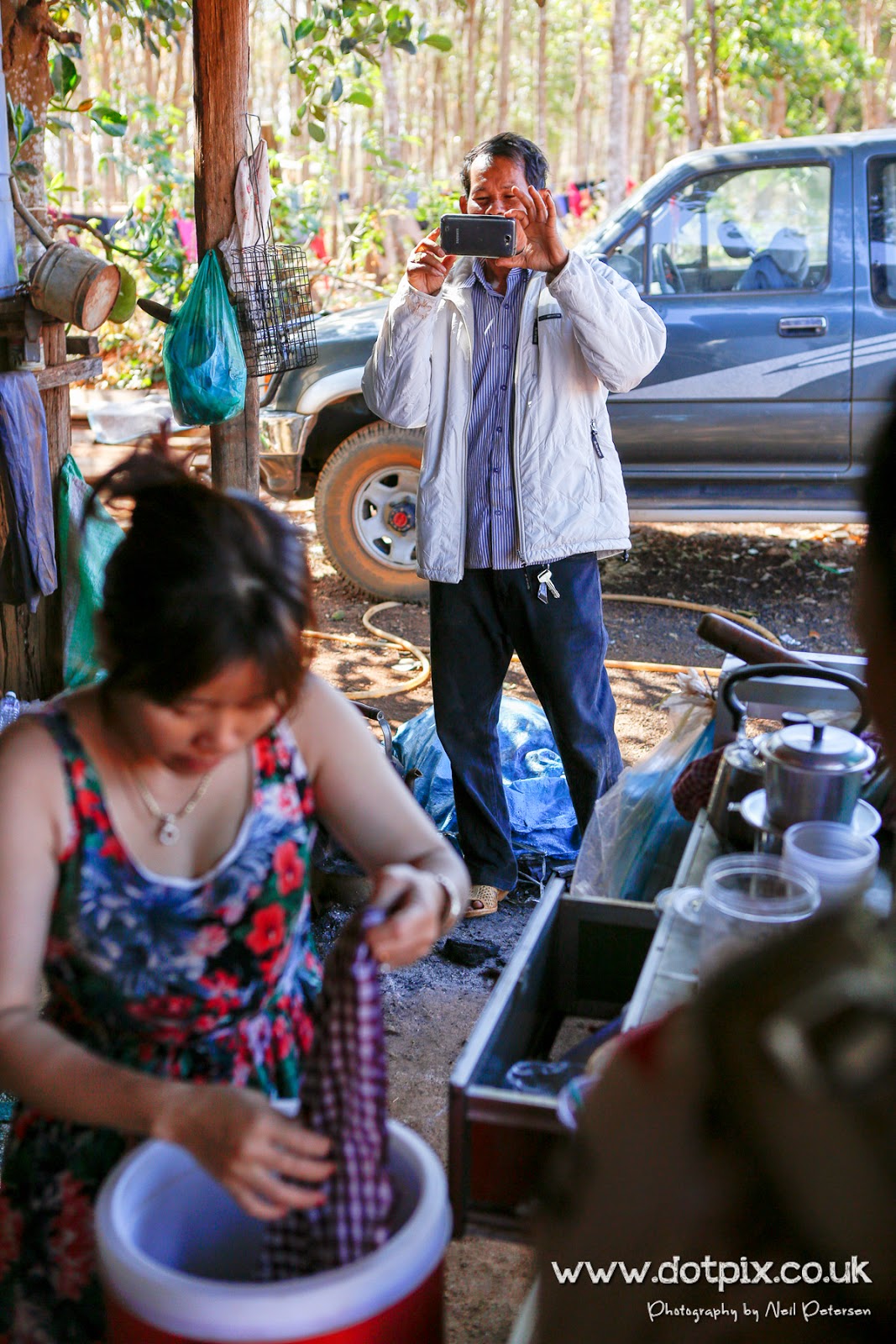 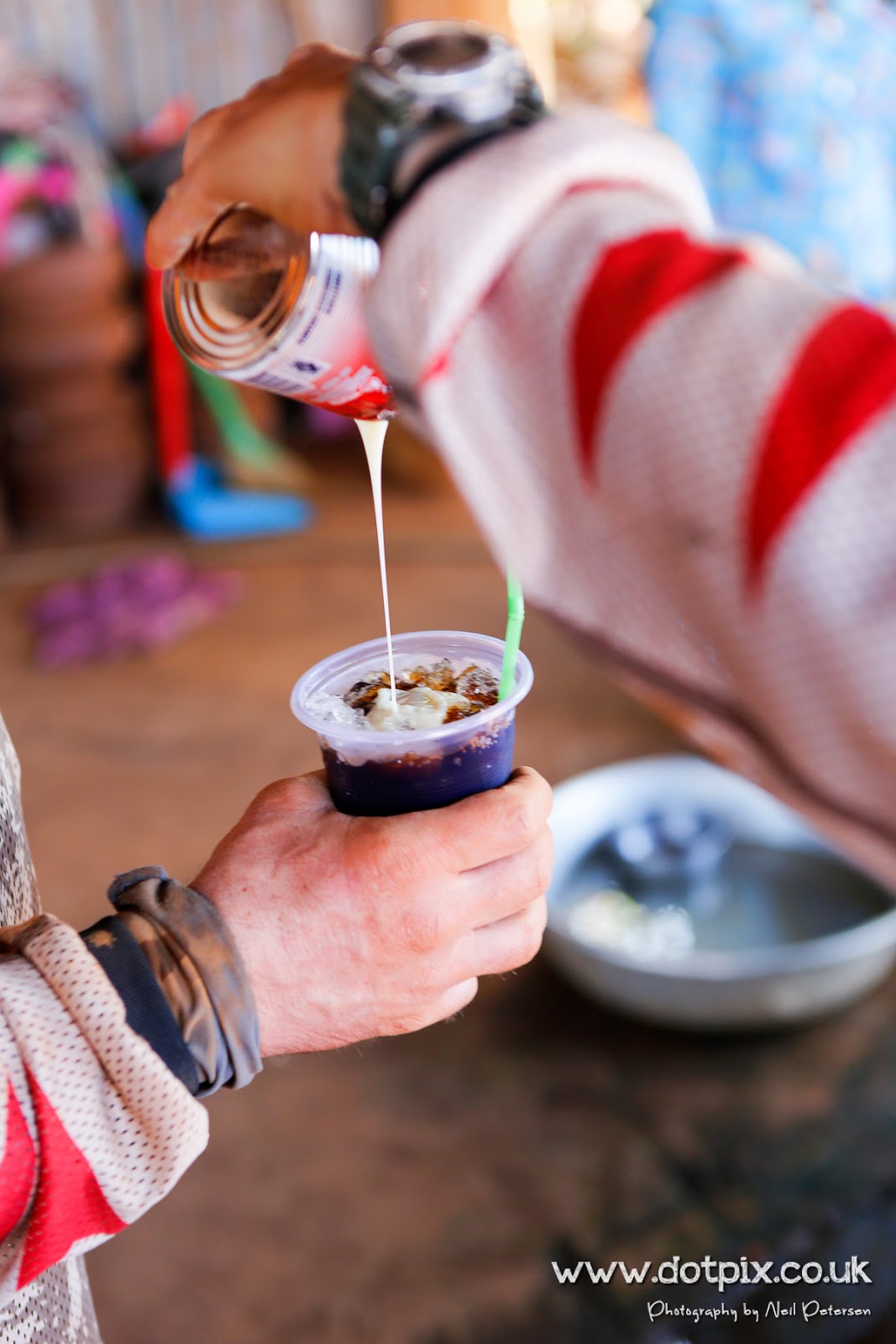 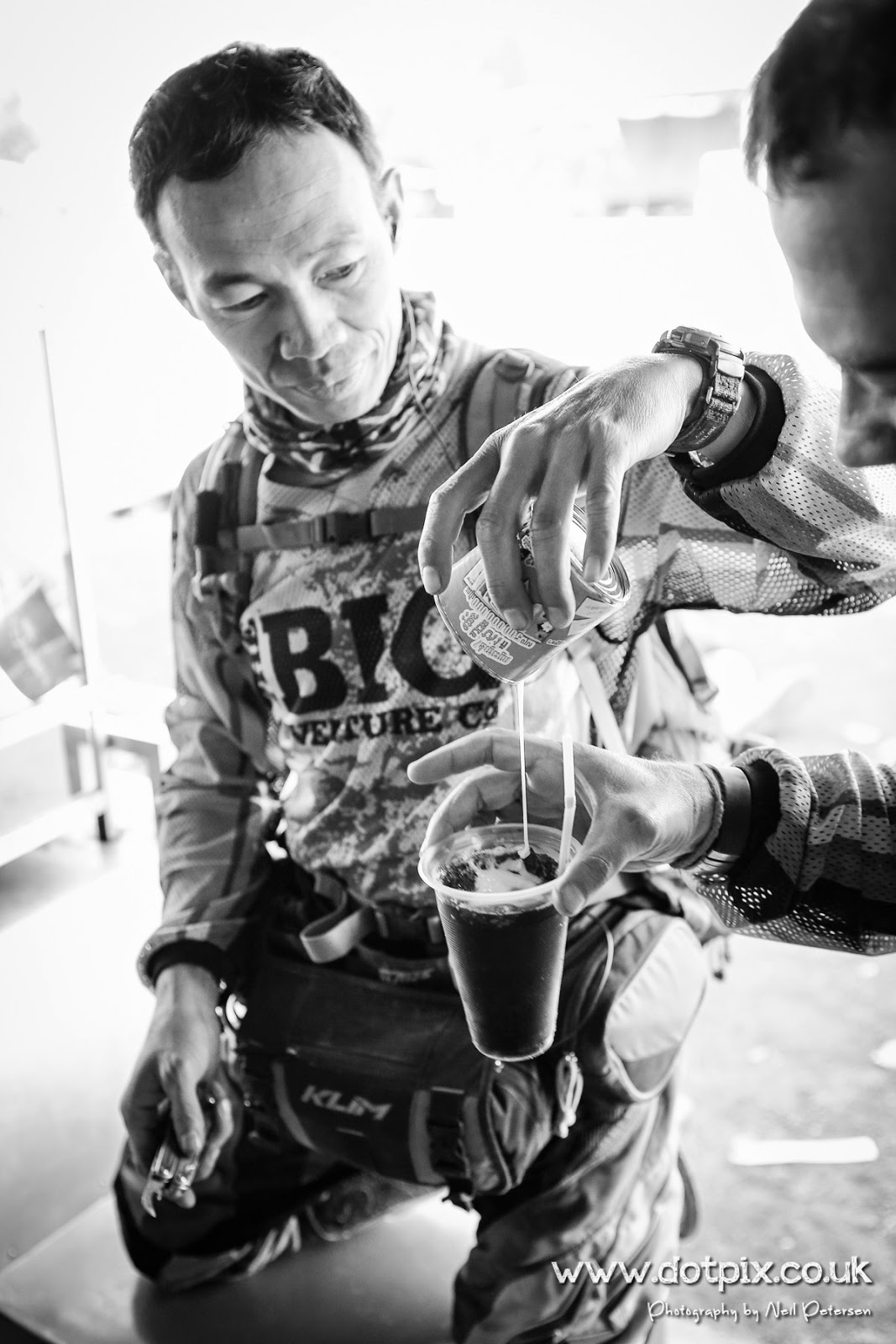 We again left the road and headed onto dirt trails. The first section was very heavily rutted and due to the changing routes there was a slight confusion if we was actually on the right path so we doubled back and confirmed this before heading off again.

The ruts quickly dissapeared and we road a long section of forest/jungle. These parts are used by loggers, some legal and some not. As we were riding though we found there was a lot of controlled burning which seems to be the case in the whole country at the moment. 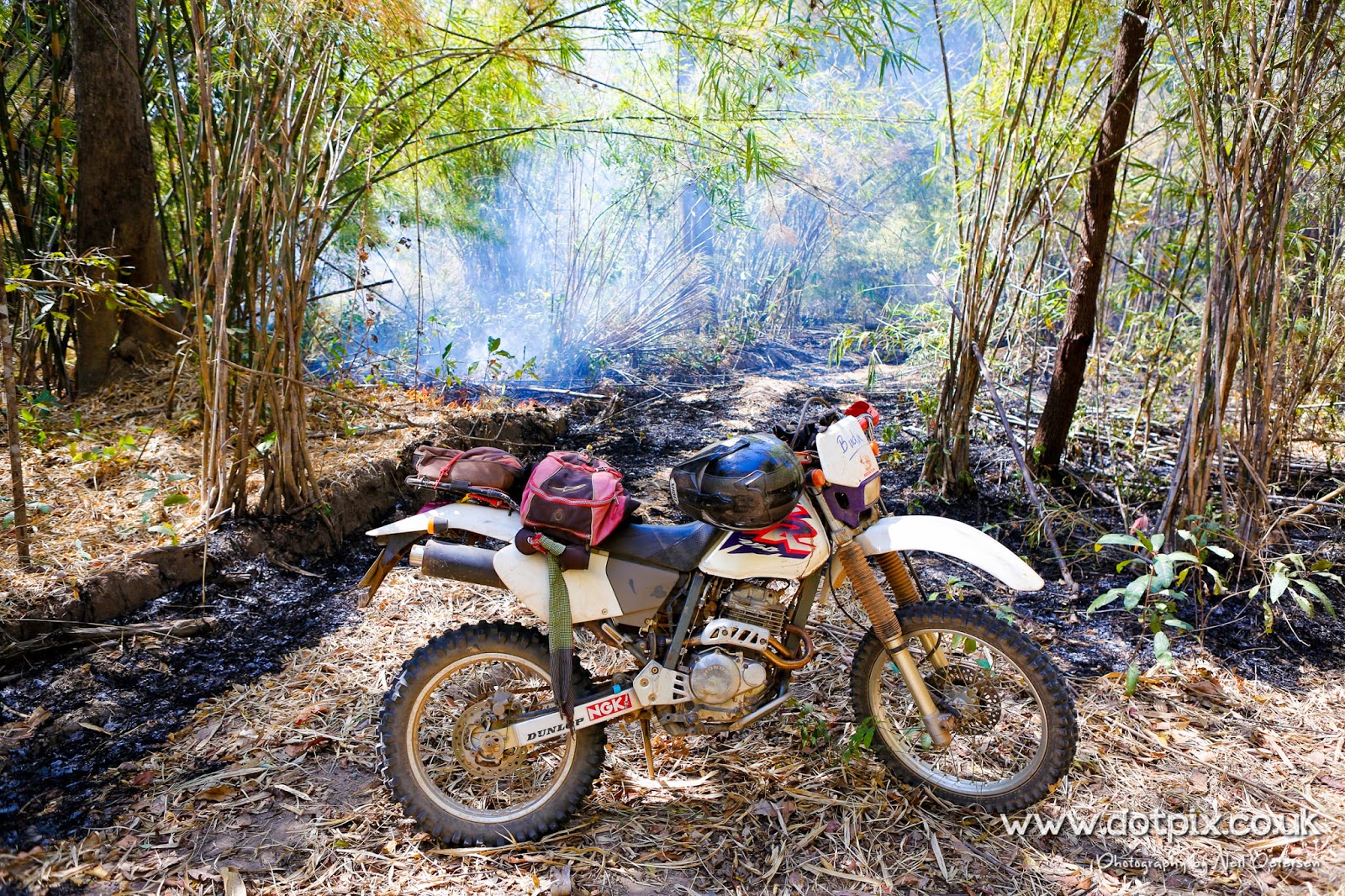 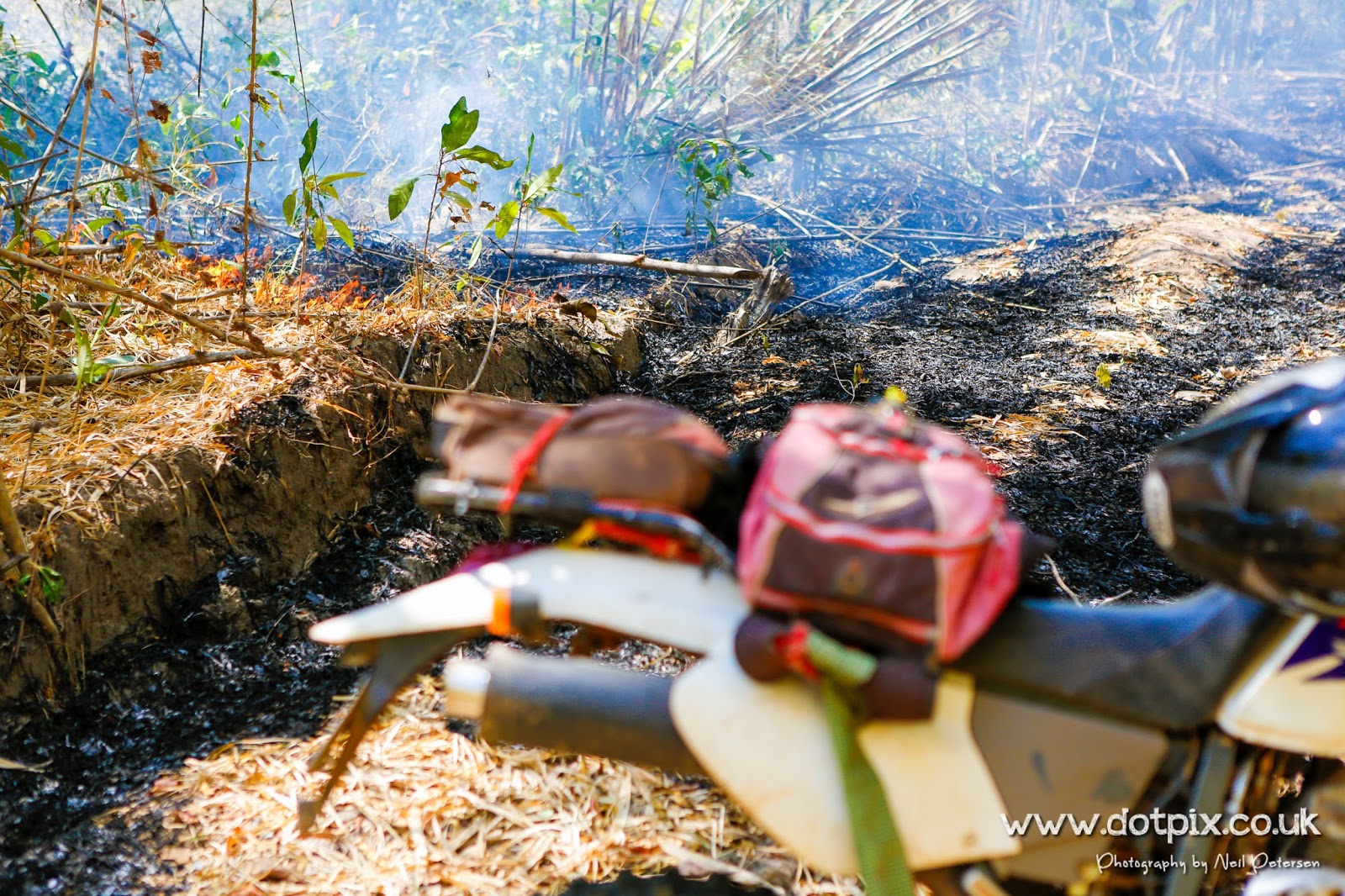 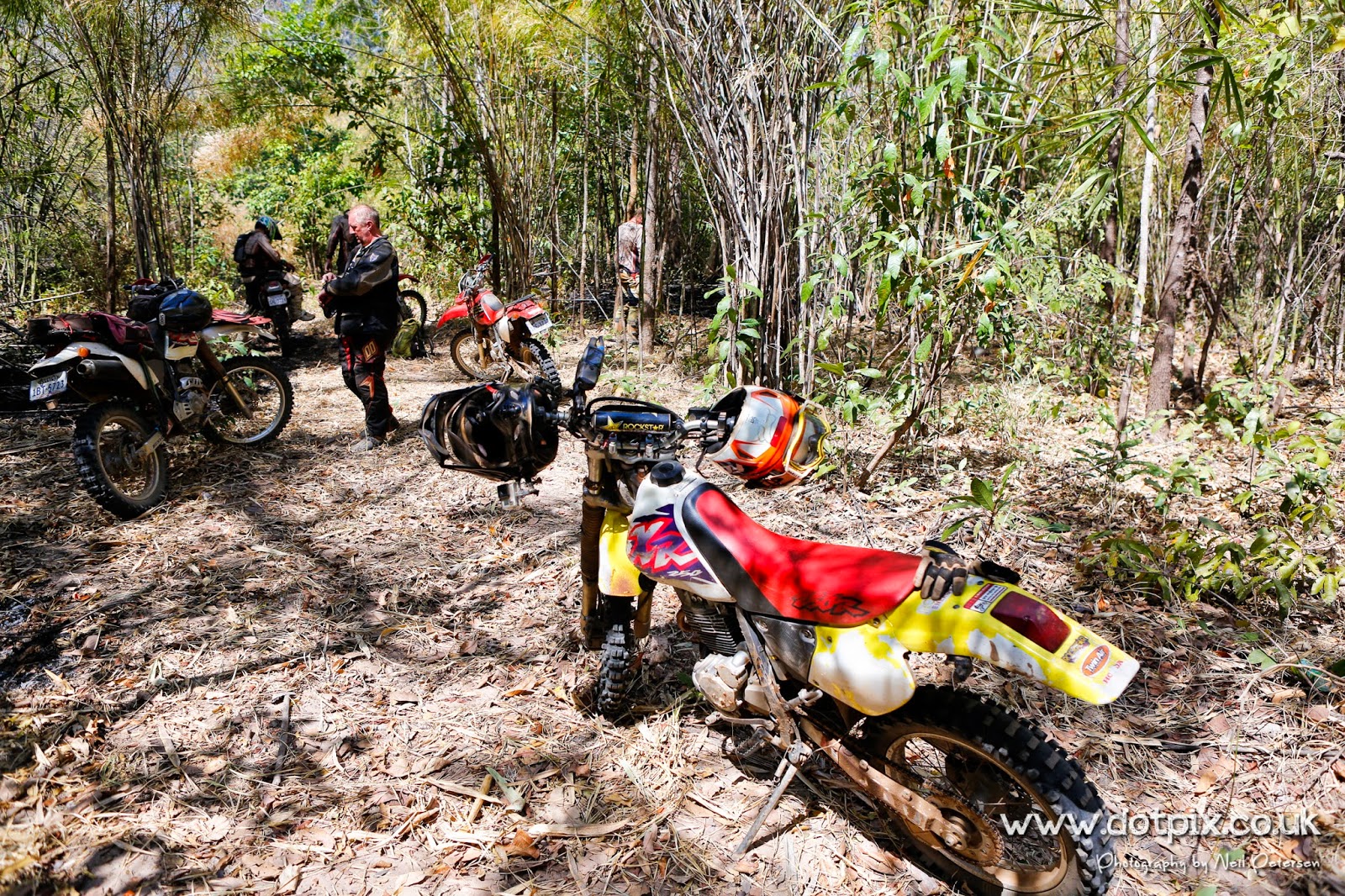 Tony had to quickly make a repair to e broken side stand spring, this involved the use of the trusty cable/zip tie until it was replaced. The XR250 doesn't have a cut out switch on the stand so it's more of a safety issue as it would be very easy to catch a broken one on a tree root or rocks. 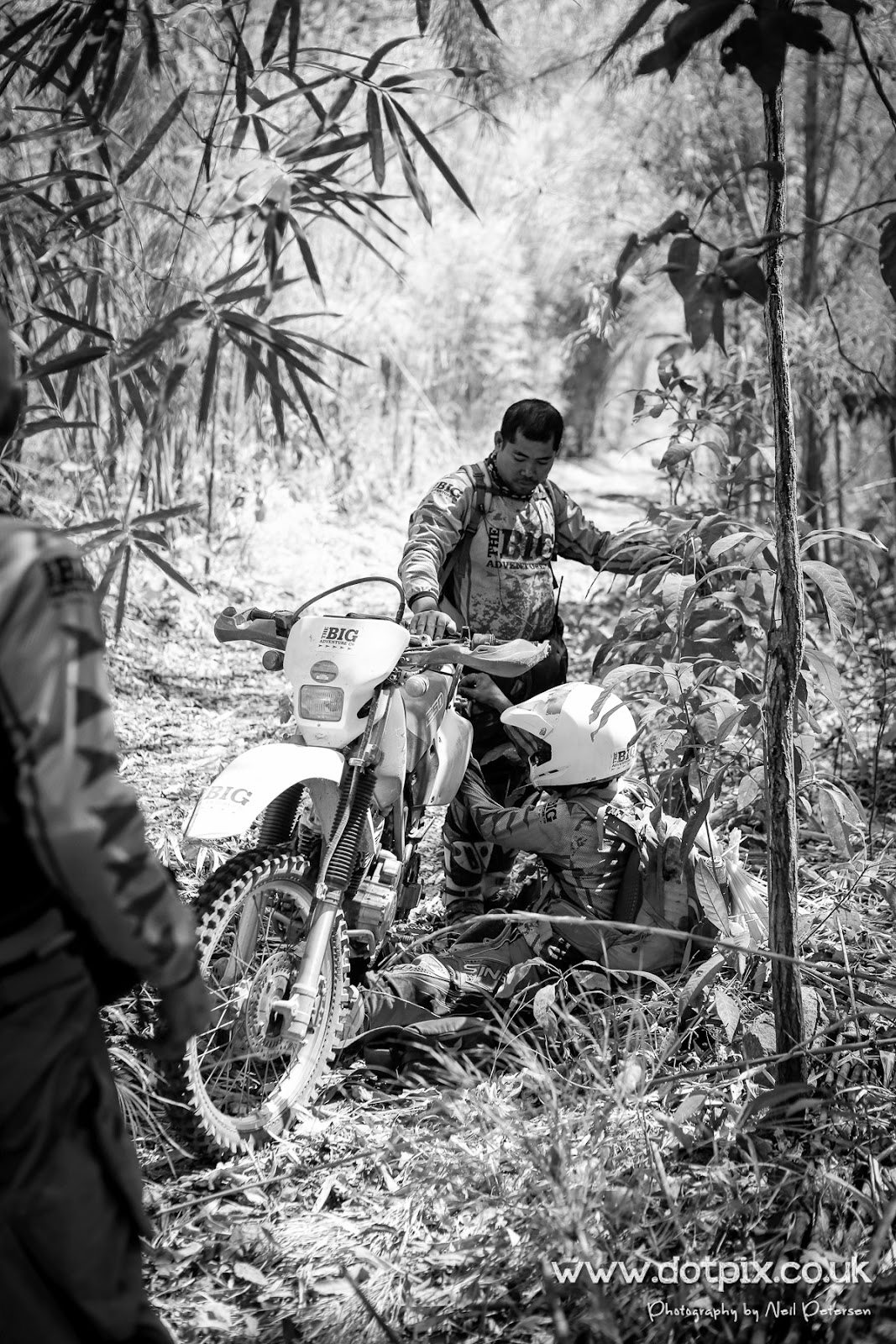 Leng and Dave's relationship was blossoming and Leng seemed to be passing the days by outrageously flirting with him at any available opportunity. 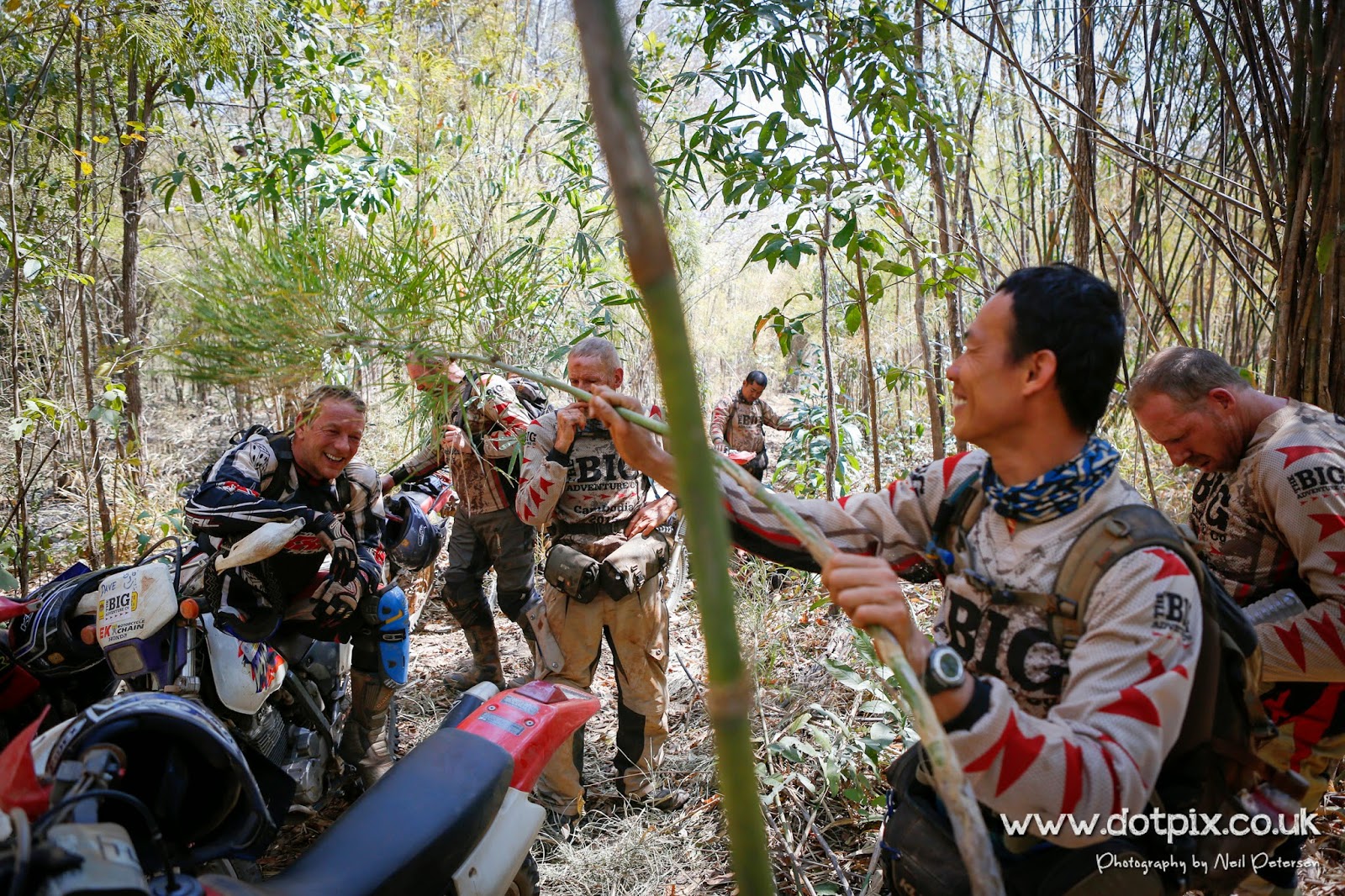 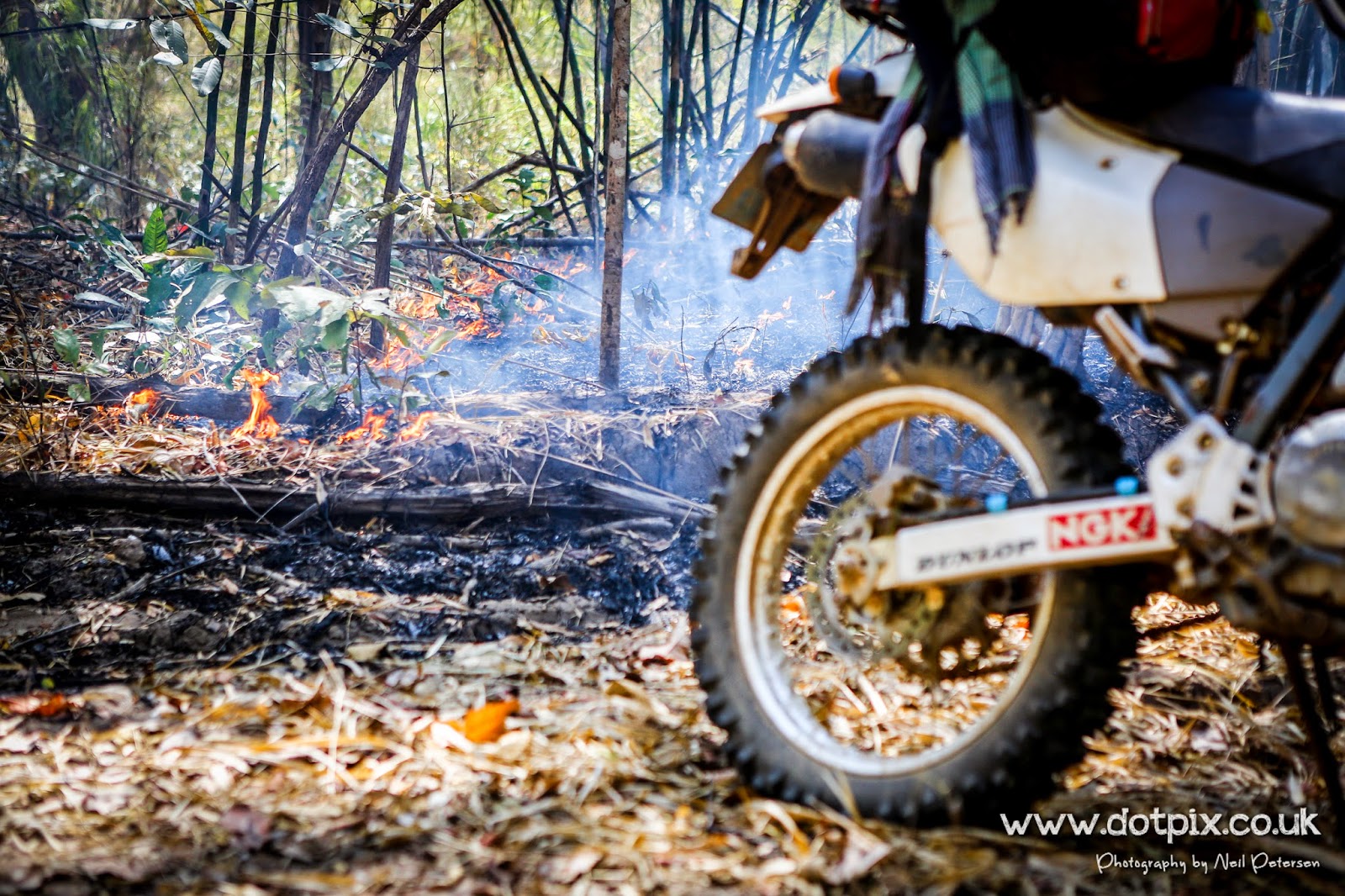 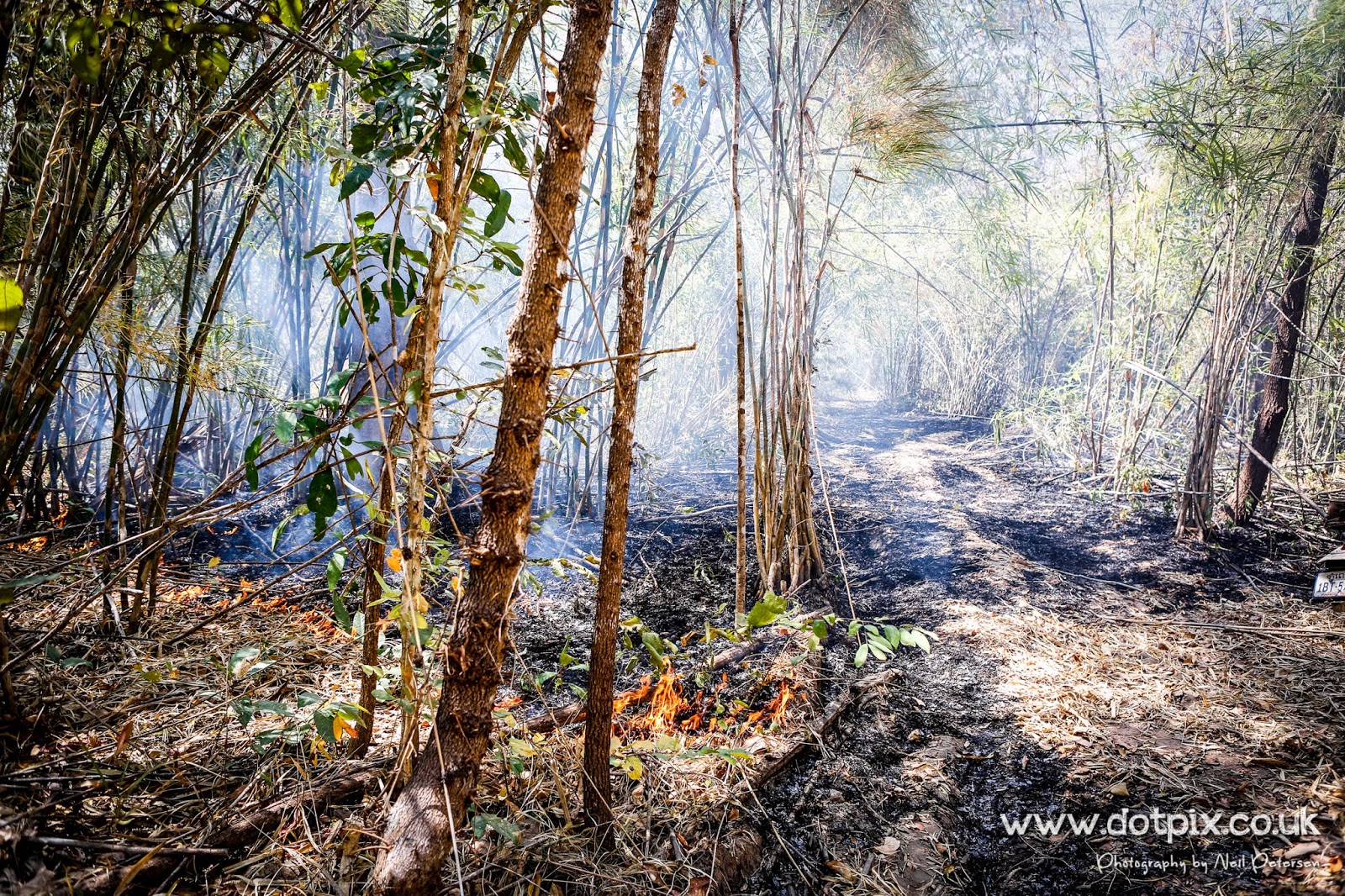 We rode on to this riverbed which in the wet season would be totally submerged. 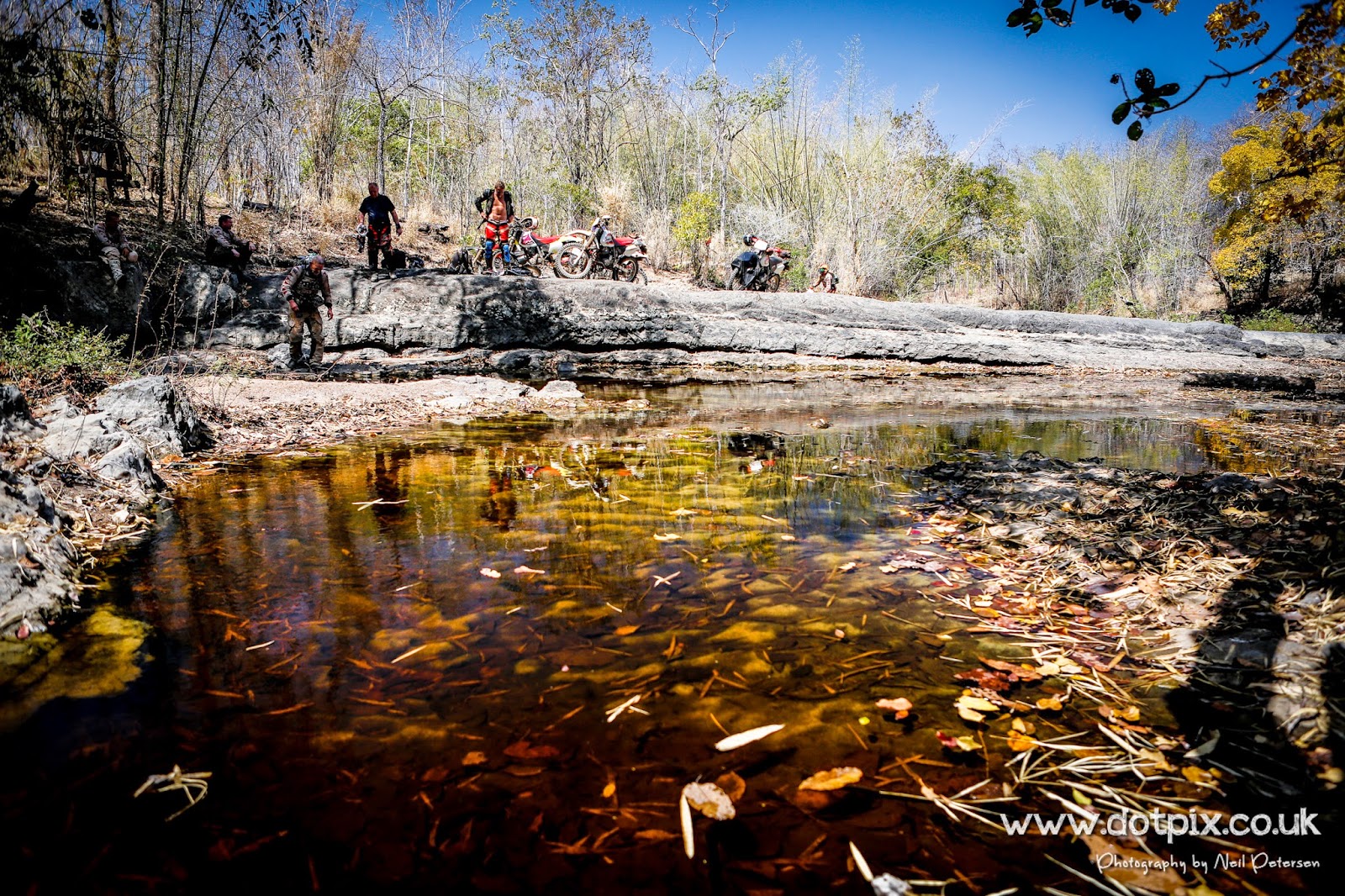 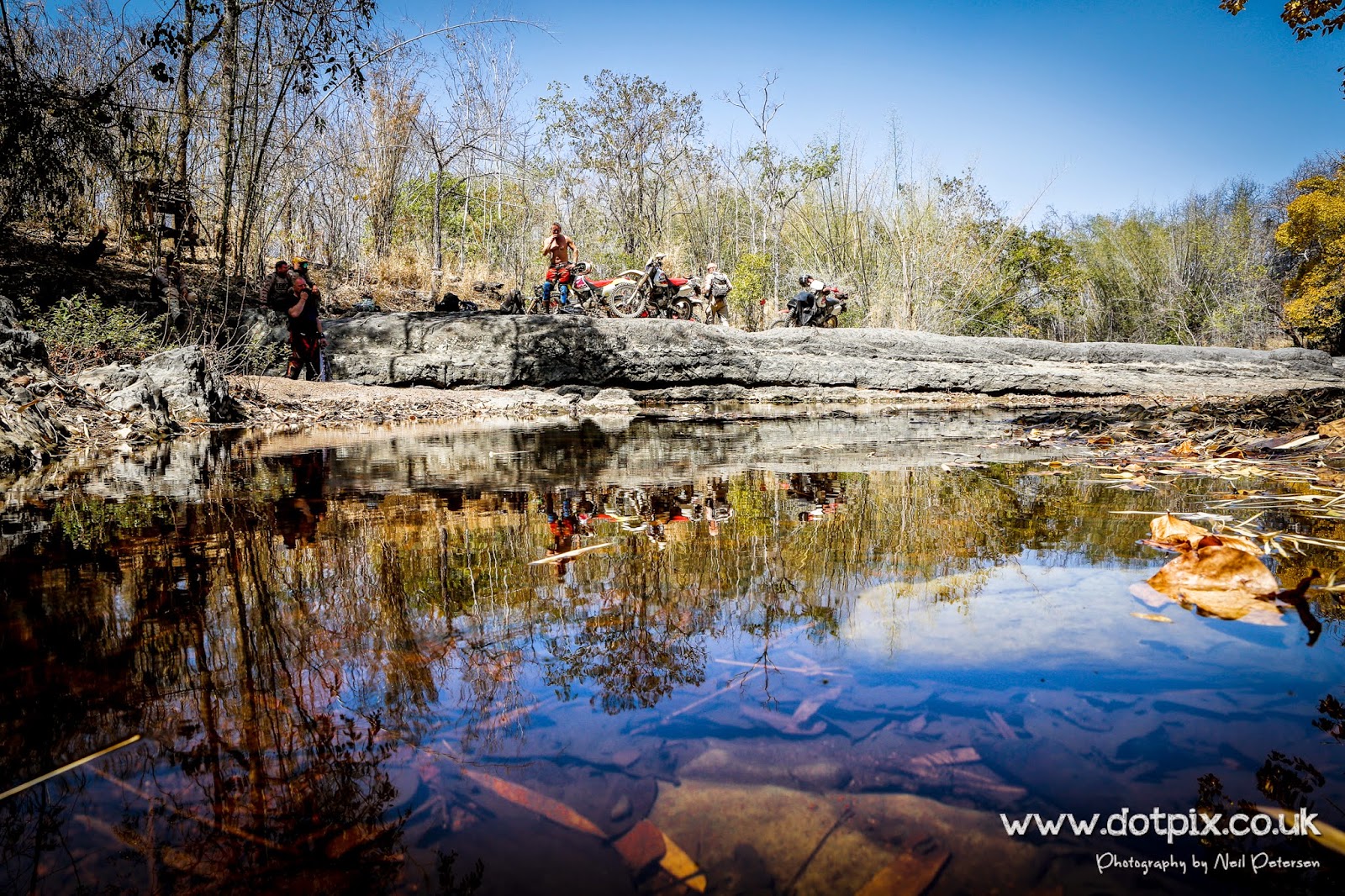 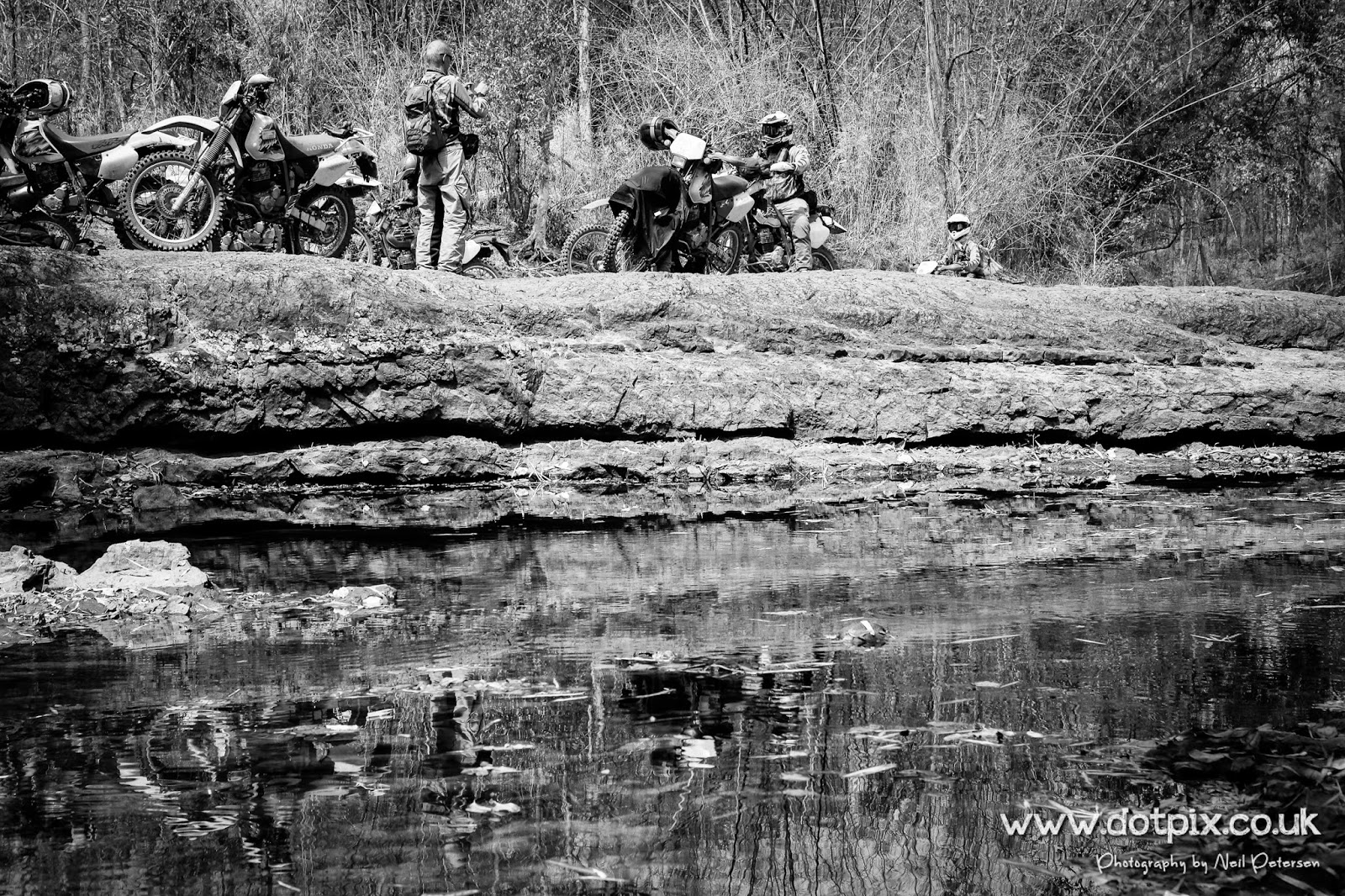 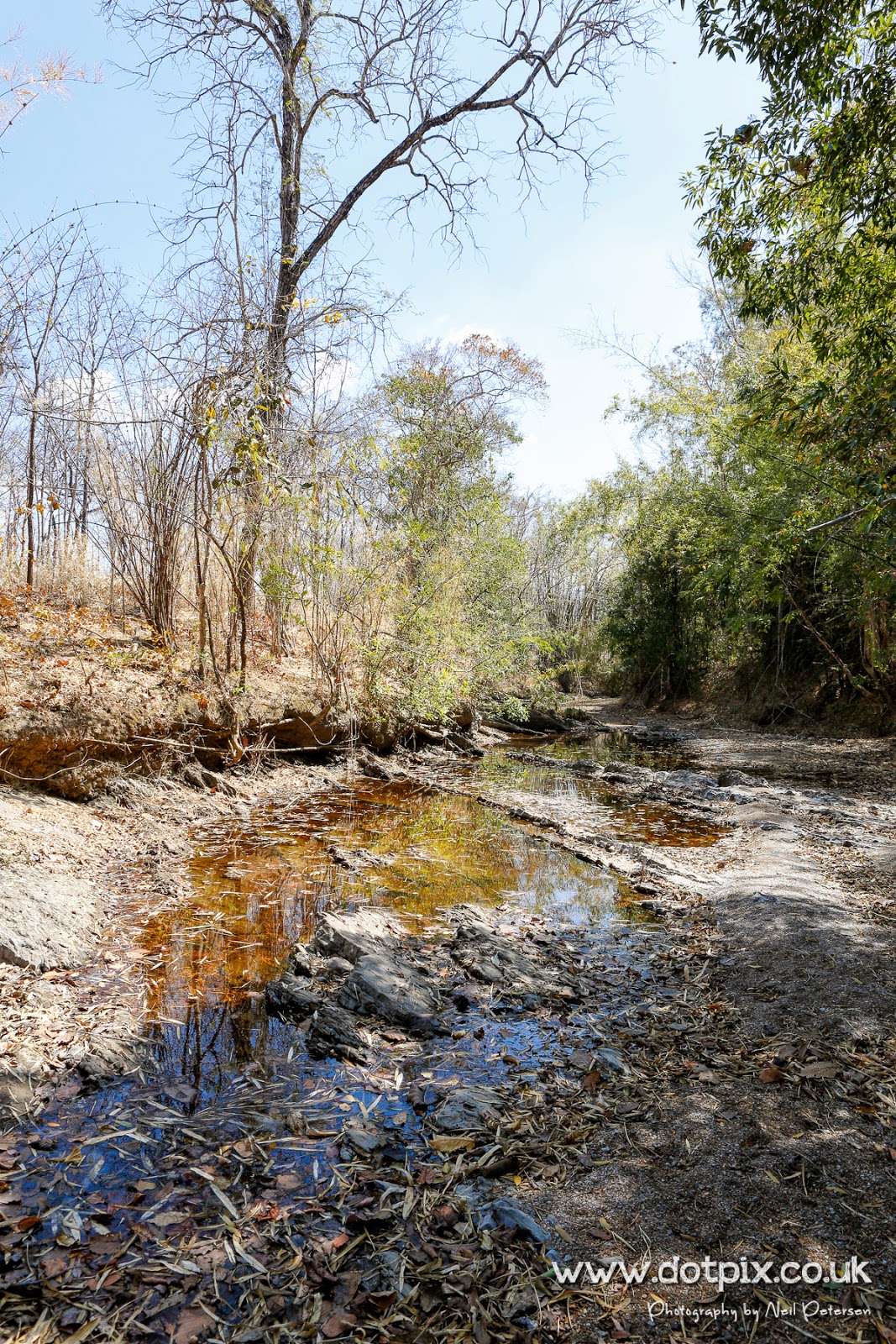 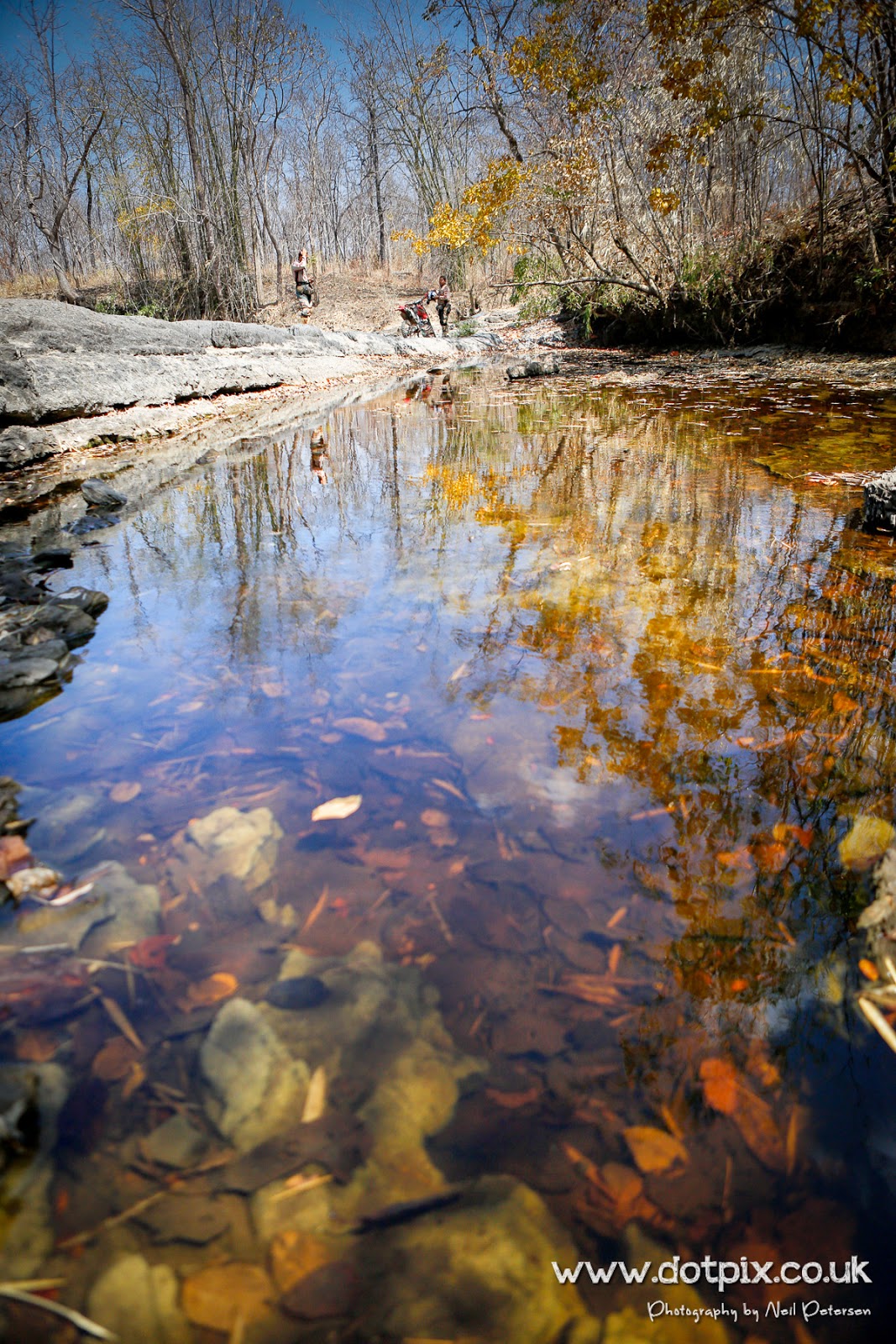 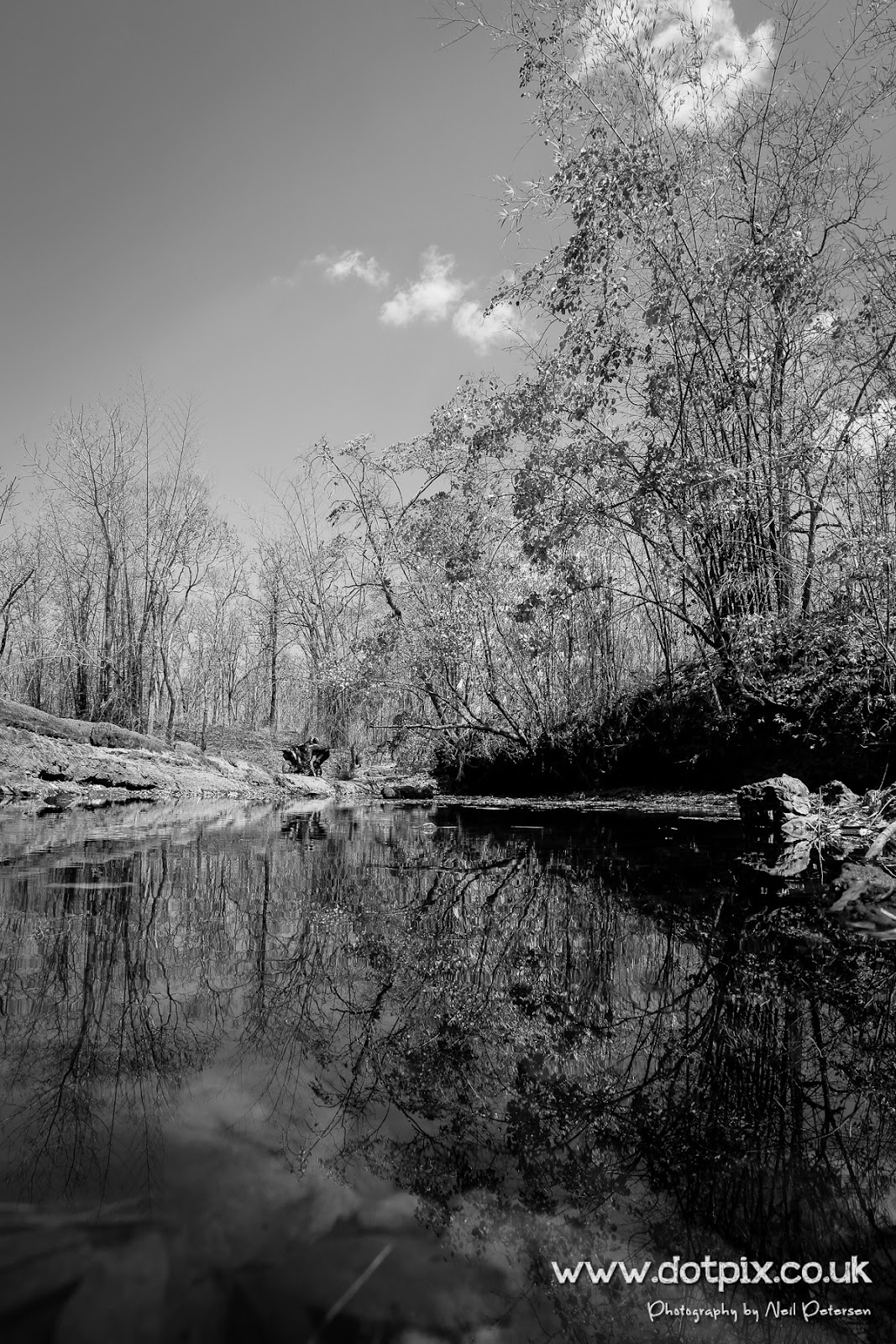 Brendan took the opportunity to cool down his body amour while the 'Lave' (Leng and Dave as I have just named them) story continued with play fights. 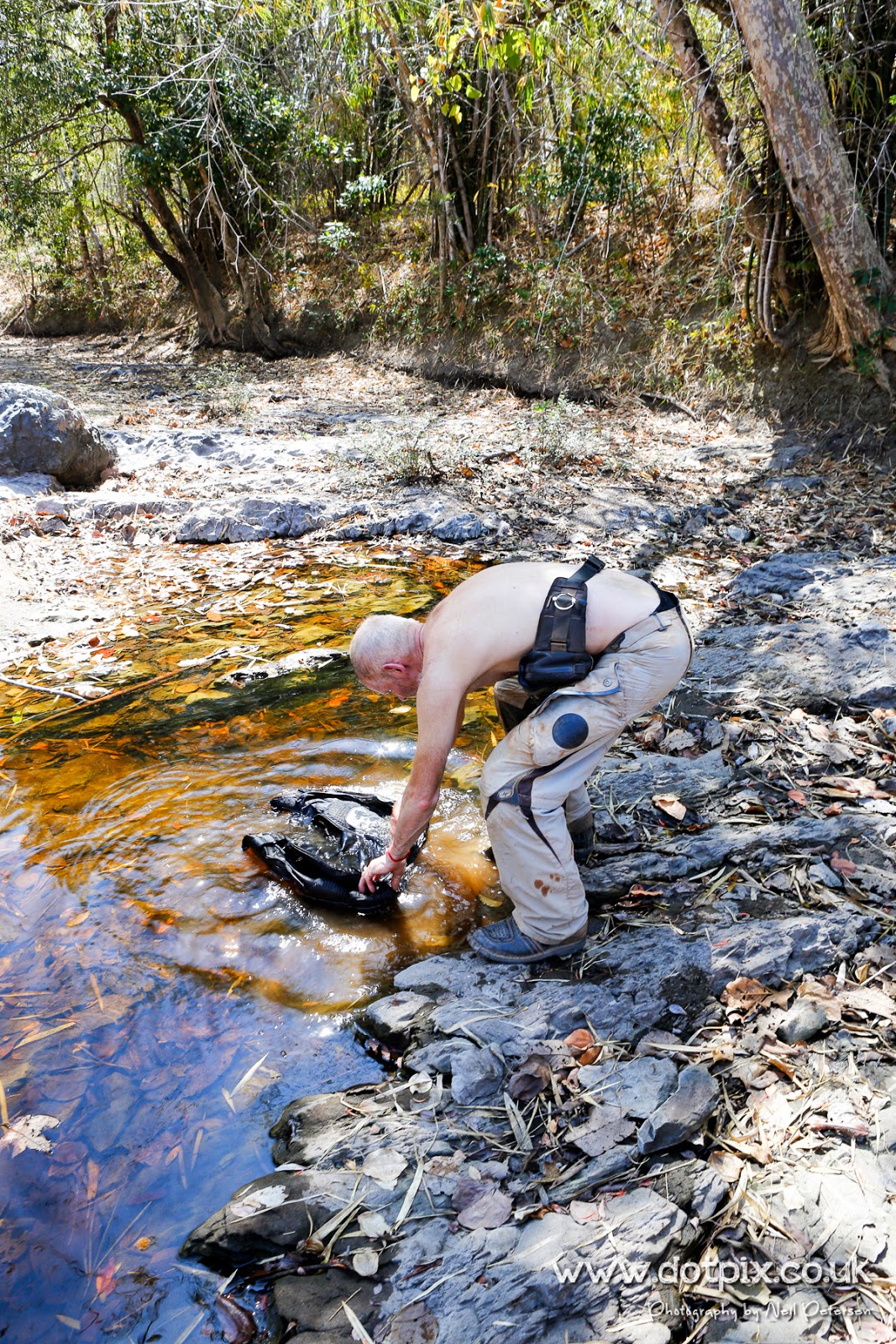 We set off again for about 10km, but this time the ground was different. This was my first introduction to long stretches of sand, some of which was deep. At first it was terrifying as the front of the bike seemed to have a mind of its on and leaving me feeling like I had no control over the bike. With the recent memory of my fall from the previous day I was hesitant and tense. After a while I seemed to get into the swing of things and managed to get through it, accelerating over small ditches and ruts seemed to be the way to go rather than going around them.

We stopped for lunch and to be totally honest I was done for the day. Shattered and there was about another 40/50km of off road to cover in the itinerary. We had a chat with Nick and Leng (the guides) and as I had my GPS on my we decided that there was an option of taking the red dirt road back to Banlung with the support truck following us just in case of any problems with the bikes (he was going that way). We put the option out there and 3 of us decided to take it and try and get to the hotel early for a well deserved beer while the others continued.

On route to the hotel we crossed the Srepok River and stopped to take in the views. 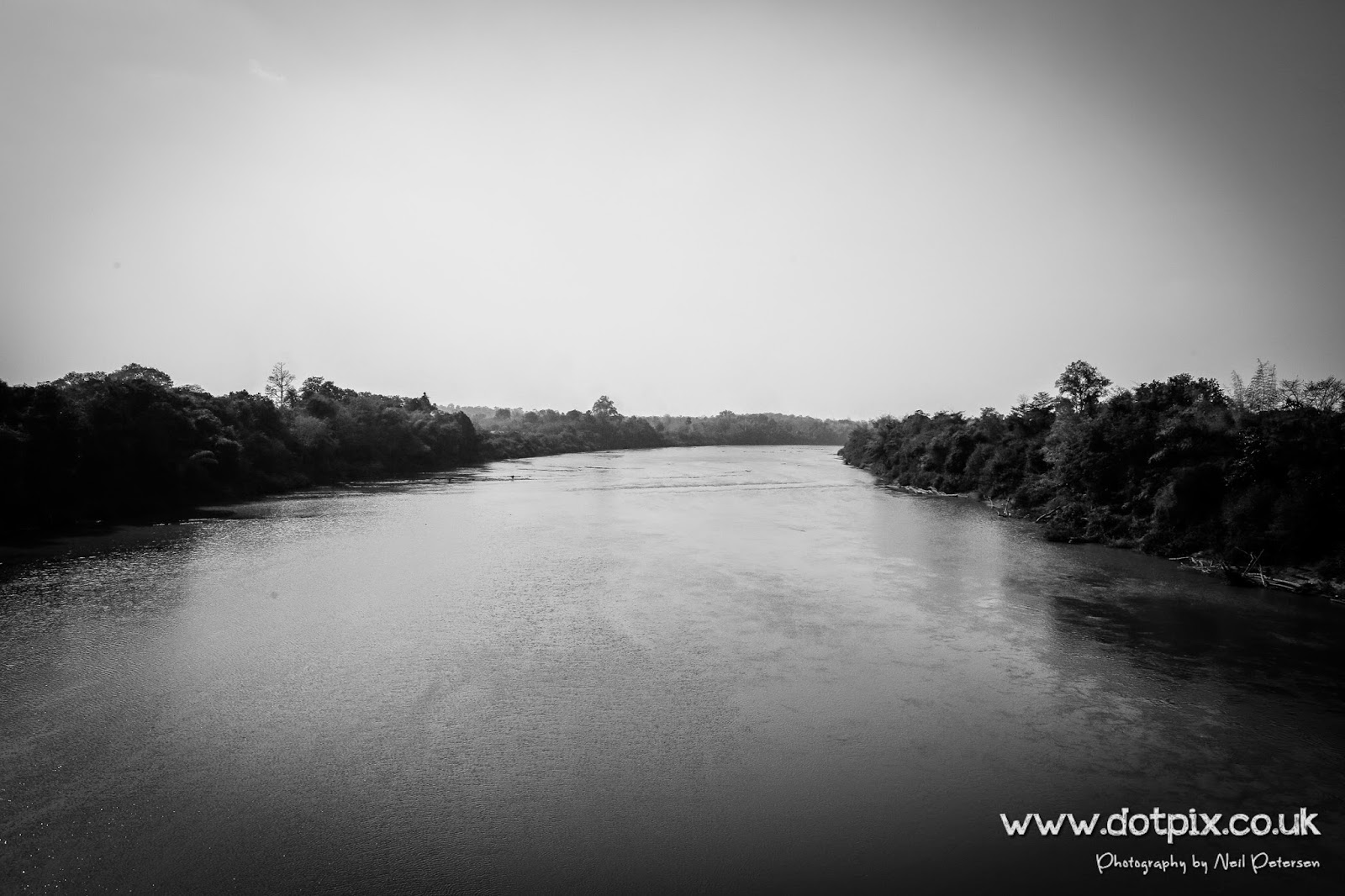 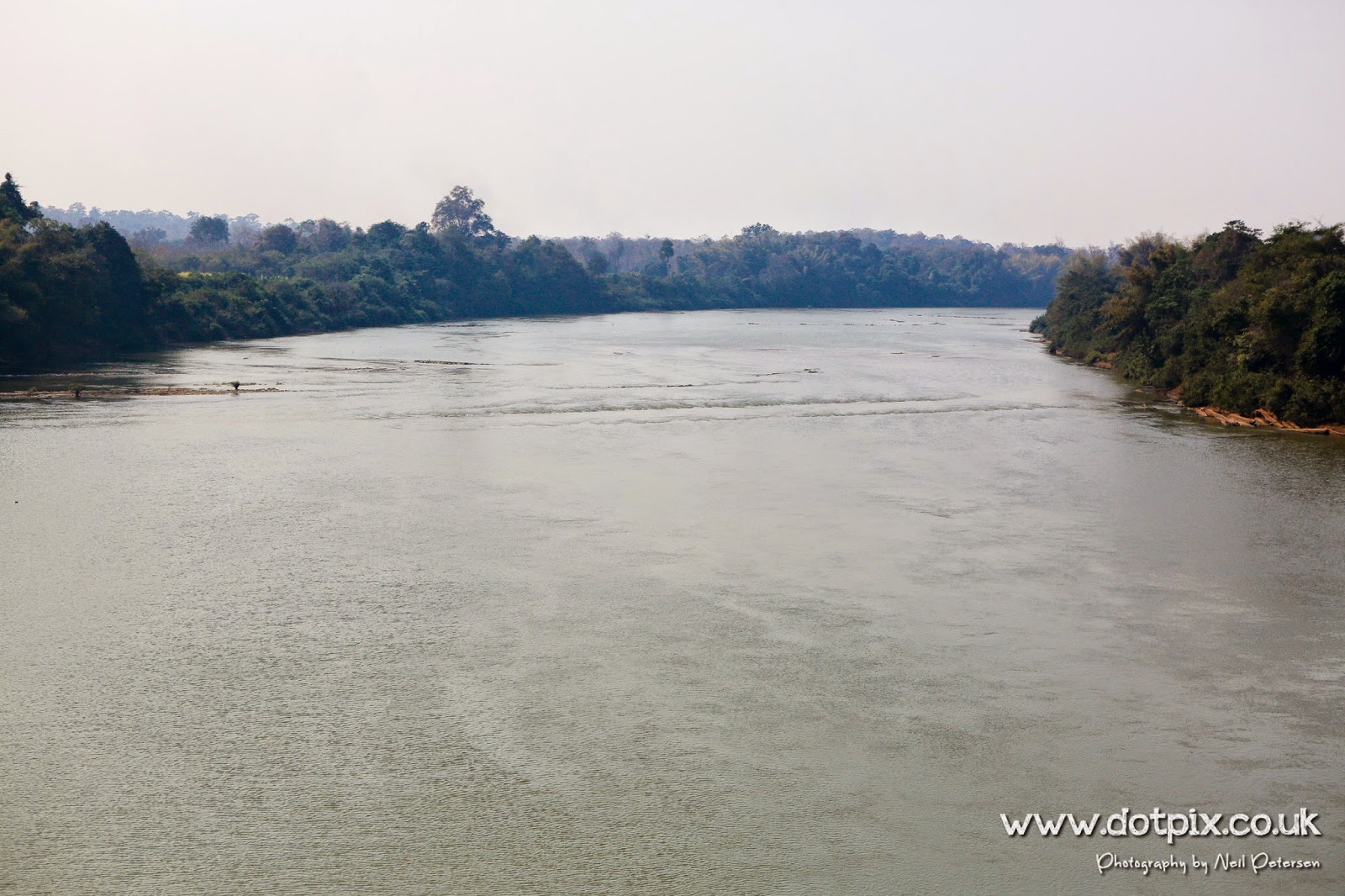 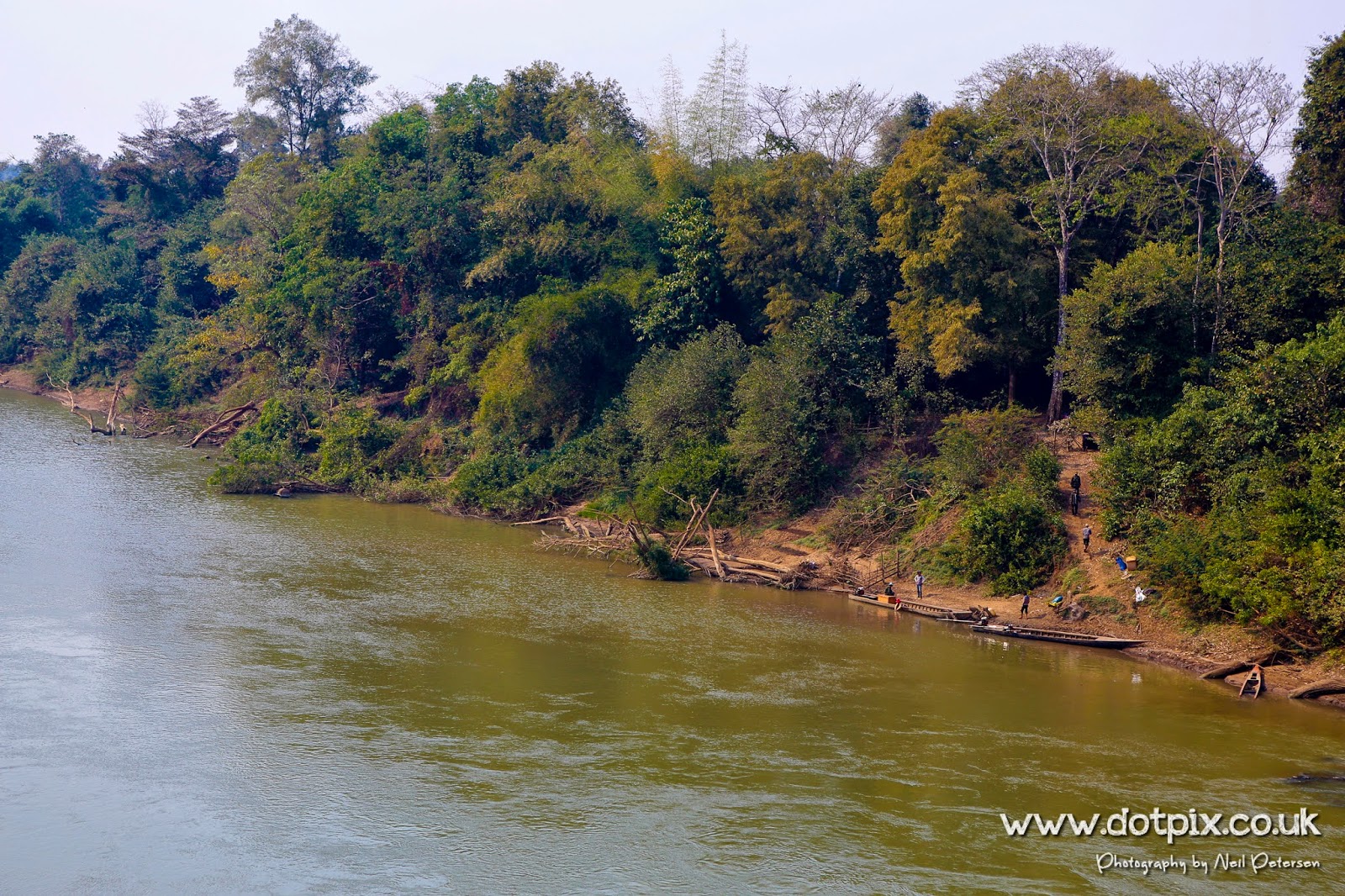 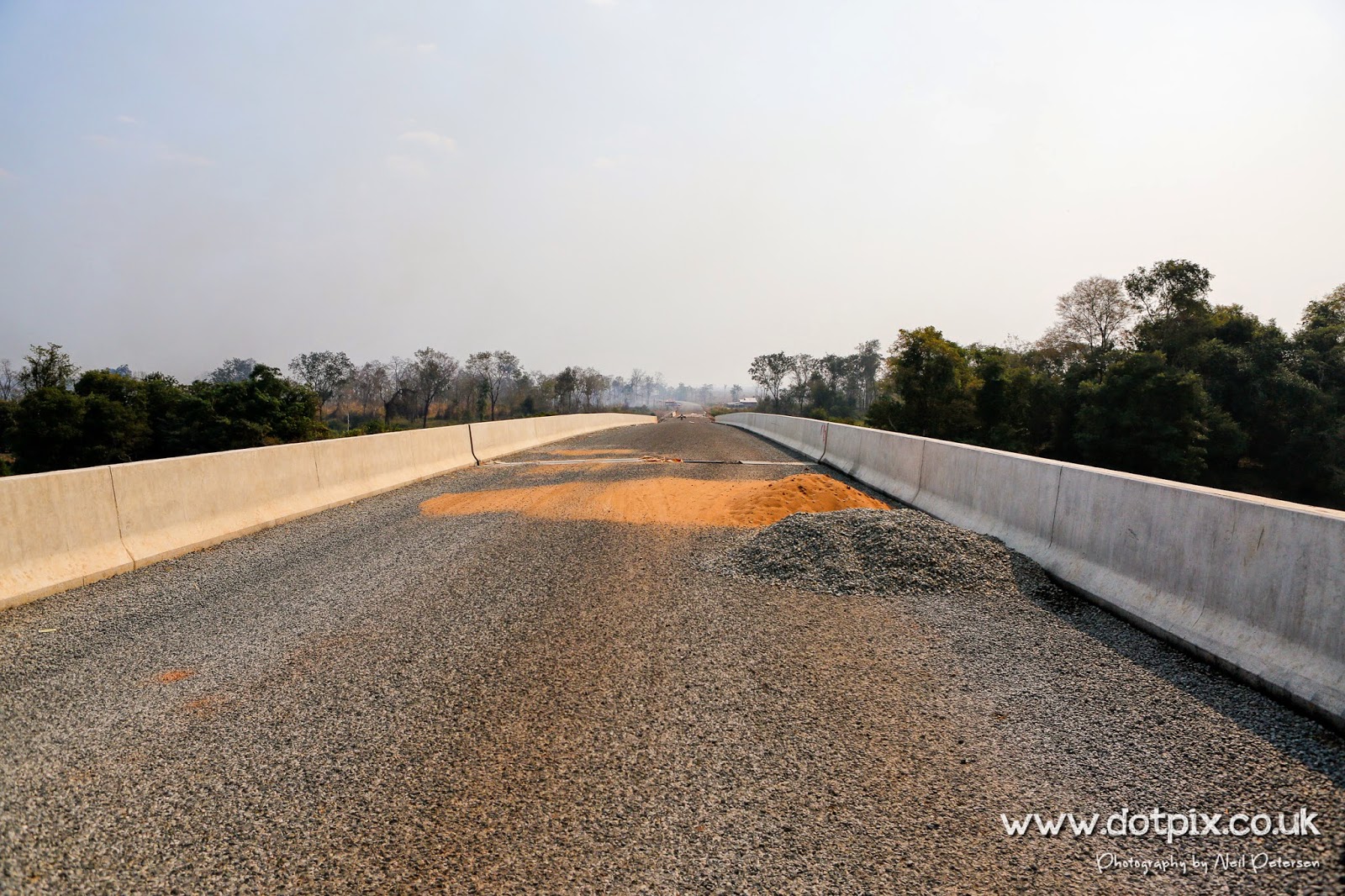 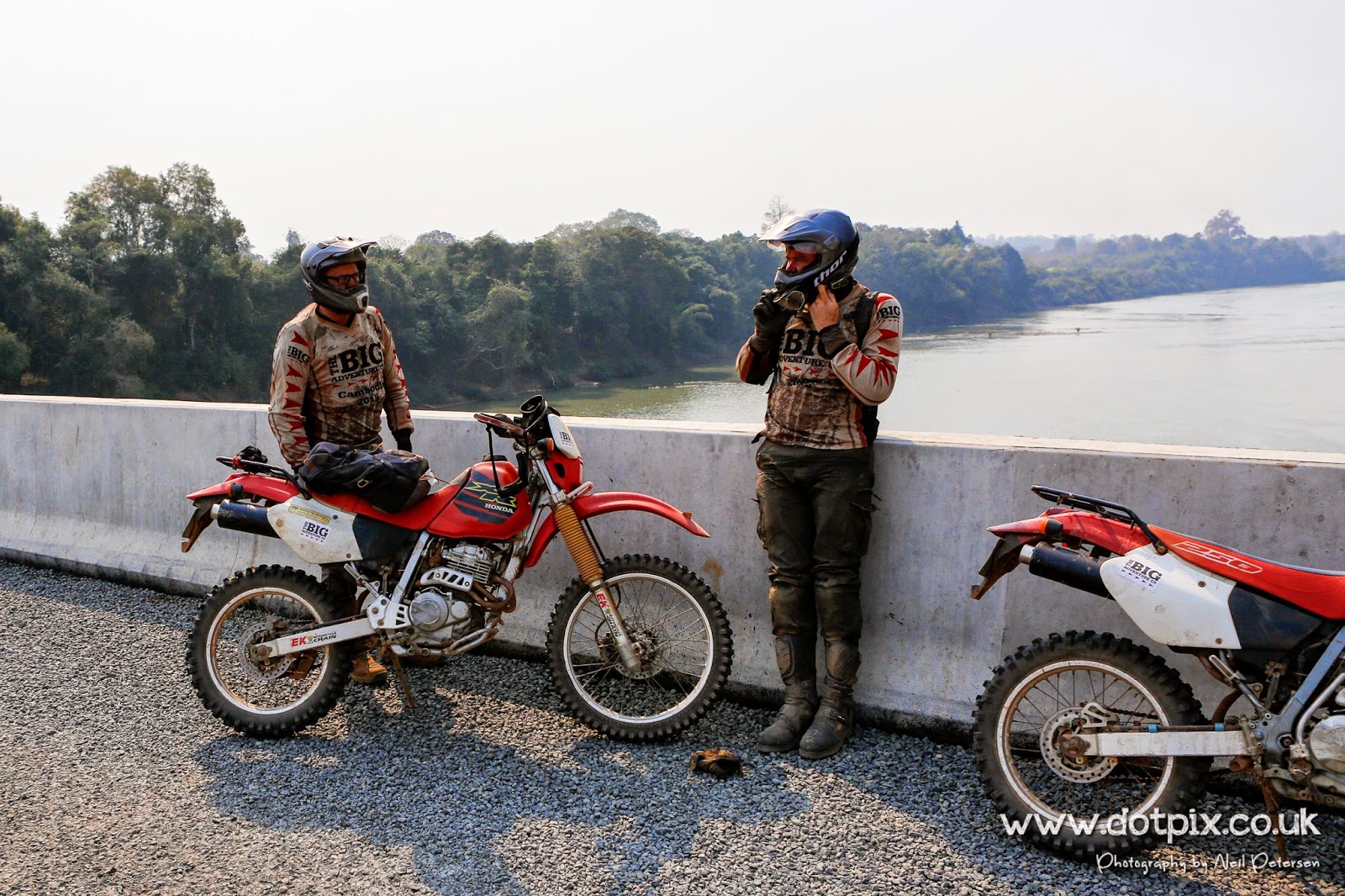 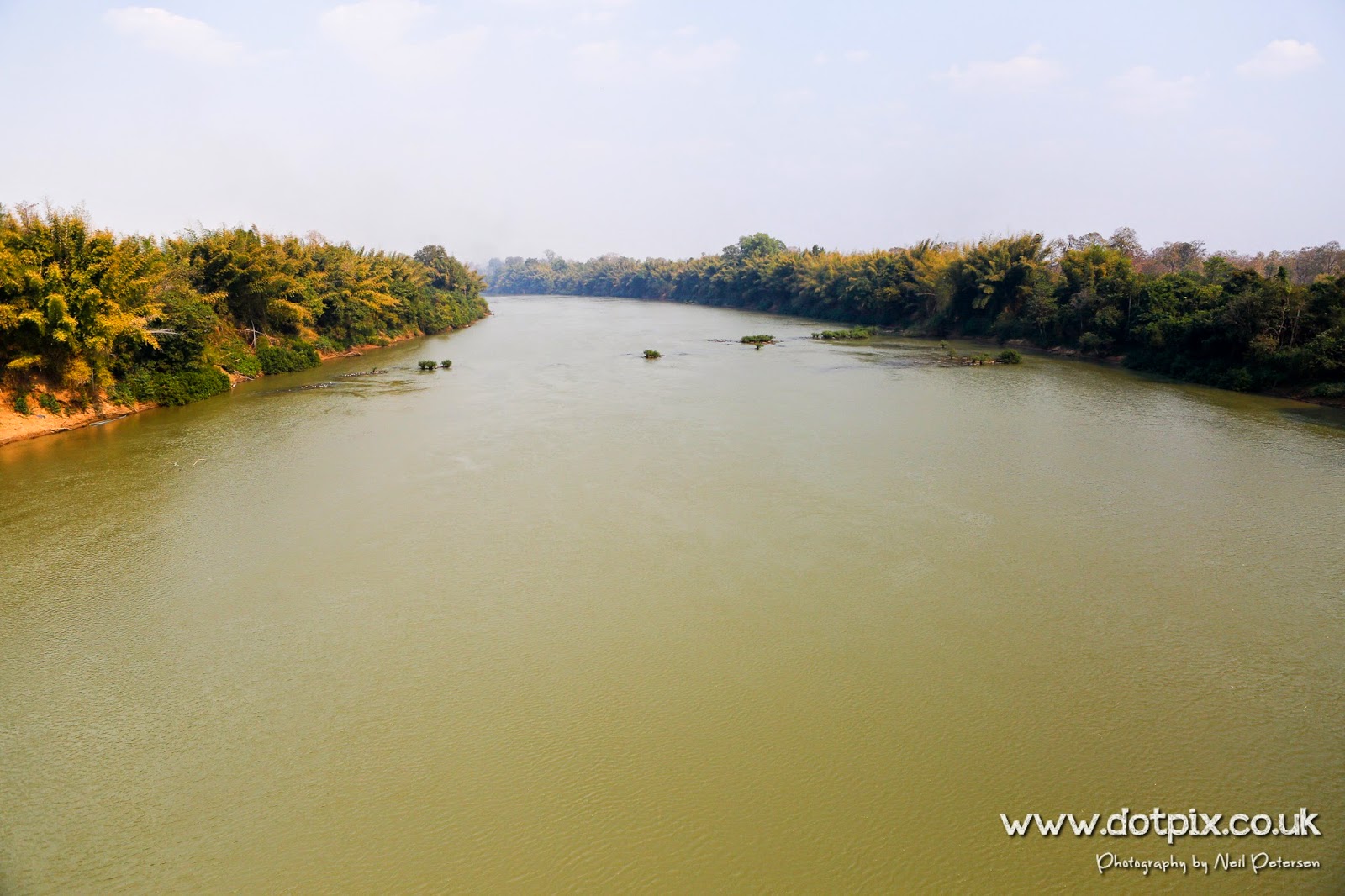 We arrived in Banlung at Terres Rouges and immediately got out of my boots. I had a problem with my feet as my boots had got wet at the waterfall the previous evening and didn't have a chance to dry. So I had spent 8 hours in wet boots and it looked like I had trench foot and felt like I was stepping on hot coals with every step I took. I washed them and used some athletes foot powder to help dry them out while I sat in the bar uploading a few of the previous days photos to Facebook.

We had been promised that Terres Rouges cooked an amazing steak (best news ever at this point as I haven't had a decent steak since leaving my England).  With the very welcomed news of a rest day the following day a good few beers were consumed that evening sitting around talking about the days events.

All of the photos I took from Day 2 can be found here.

We covered 188km in around 8 hours including the stops.
Posted by Neil Petersen at 6:41 PM